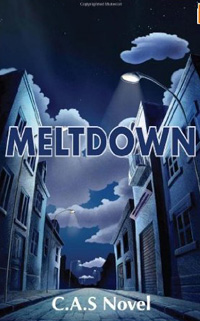 Meltdown by Christopher Albert Summerfield is a modern thriller. The story begins in London at King’s Cross Station during a typical 21st century day; people are walking around attached to their MP3 players and their cellphones—escaping the reality of the recession by escaping into themselves and ignoring the world. Then suddenly there is an explosion in Central London that emits a cloud of thick, dark-green smoke. Minutes later a second explosion rocks the ground and communication goes down. In the aftermath, there is utter chaos—people are running without direction, and for some unknown reason, begin to attack and kill without provocation.

It is in this bedlam that the reader meets Mary and her son Mathew. They are running to the Underground in an attempt to reach Mary’s husband. Along the way, they see the senseless slaughter of men, women, and children by people who seem to have gone mad. Underground, they meet up with Ron, a tube worker who has barricaded himself in his office. Because the surface is full of dead bodies, crazed people, and looted shops—with no help in site—they decide to travel along the tracks in search of assistance.

On the way to the next tube station, they meet up with John, Jake, and Emma. John is a police officer and they hope he can shed some light on the situation. When they reach the next station, they find more dead bodies and an injured woman, along with more supplies and a radio. John decides to check the surface once more. They only form of rescue he encounters is a police helicopter with the message to head for Parliament Hill.

Now that the group has a destination, they decide to scout the tracks before they head for the surface. As the group waits for John and Jake to return, they settle in and share with each other their version of what happened…

Meltdown is written in multiple point of views; in the beginning, the point of views are somewhat jumbled, but if the reader can follow the action, this confusion actually fits in with the chaos that is happening and emphasizes the fear and uncertainty of the characters. A majority of the story is the internal dialogue of the characters thinking about their loved ones and their lives prior to this event. The reader will enjoy getting to know each of the people in detail. It seems that the reader is privy to every thought in their heads. For the reader who wishes to puzzle out the mystery of the explosions, this in-depth characterization could get frustrating. The mystery remains unsolved until almost the very last page. The entire book, the reader will want to know: what caused the explosions and why have they made people bloodthirsty? 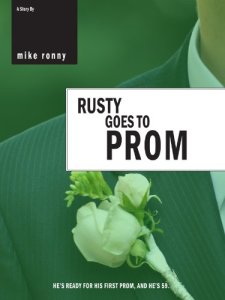 Rusty Goes to Prom is a short story with a simple premise, but rich prose. The narrator is none other than Rusty Barker—the high school janitor. Rusty is in the autumn of his life, but his status as janitor makes him popular with the student body. For reasons unknown to Rusty, the students enjoy searching him out and telling him about their lives. This story begins with such an incident—a student confides in Rusty and Rusty decides to intervene. The intervention leads to Rusty helping the student and, ultimately, helping himself.

Although Rusty Barker is almost 60, this story almost reads as a coming-of-age novel. During this short tale, he learns something about himself and his society. When the story comes to a close, Rusty has experienced new things and changed as a result. This story is perfect if the reader is looking for a quick, enjoyable read filled with humor and interesting characters.

Malevolent by David Searls is a horror novel that is told from the perspective of numerous people that live in Old Brooklyn. The story begins with Germaine Marberry as she is walking home from Utica Lane Church of Redemption. Germaine is repulsed by the new video store that moved in across the street because it is open late hours and rents adult videos. Based on his business, Germaine is repulsed by the owner—whose name the reader later learns is Griffin. Suddenly, Germaine is attacked by an unnamed man who pins her to the ground and rapes her. Germaine, however, hints that it was Griffin who committed the vile act.

In the next chapter, the reader meets Tim Brentwood. Tim is racing home on his bike when he sees the crime scene. Tim’s girlfriend Patty does not approve of the money he spends or the late hours he keeps as a DJ in bars. Tim stops anyway and meets Griffin, who swears he heard her screams from the video store, but when he came out he saw no man at the scene. The case of Germaine’s attack becomes even more bizarre as the cops let slip that there was no sign of assault.

As if the phantom rapist wasn’t weird enough, the next chapter is narrated by an unnamed male who is talking to his dead wife—the wife that he murdered years ago. She tells him mysteriously that Vincent wants him to do a specific act to atone for his actions. Vincent is the preacher at Utica Lane Church.

In the preceding chapters, every character in the novel experiences an explainable encounter. Vincent swears he sees a strange man coming out of his house and then taunting him at the grocery store, the cop assigned to Germaine’s case goes up against hostile felines, and Tim DJ’s a wedding and a voice in his speakers tells him to murder a child. And things just get weirder and weirder from that point on—all centering around the church, its preacher, and parishioners.

For a majority of the novel, the reader is left wondering how all of these events and people fit together—it’s all one big, horrific puzzle. Not only is this novel terrifying, it is also challenging—it’s a mystery of epic proportions. The reader will not know the answer to what connects all of these seemingly random events until the very last chapter. The reader will wonder up until the very end whether or not Tim, Melinda, and Griffin can beat an unknown, malevolent force or if it will devour the entire town whole…